Rare is the visitor to Corfu who fails to pause in wonder at the beautiful Bay of Gouvia. The abundant shades of green on the land and the sparkling blue of the sea embrace the jewel of the bay, the Church of the Ipapanti of Christ – the church of the purification of Christ. This exquisite church, which used to be called The Church of The Pentecost, was built in 1713 during Venetian rule by Daniel Kombitsi, the offspring of a Cretan aristocratic family who came to Corfu in 1669 after the fall of Candia, modern day Iraklion. Daniel Kompitsi also built the monastery of The Apostles St.Peter and St. Paul in the village of Kombitsi. Originally the Ipapanti Church contained valuable works of art of the Cretan school that the Kombitsi family had brought with them from Crete. 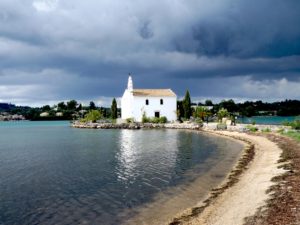 Rumour has it that Daniel Kombitsi died insane after the death of his son and the family subsequently disintegrated. All the Kombitsi property, including the Church of the Ipapanti of Christ, passed to the Theotoki family and was afterwards bought by the Italian family Scarpa. During his lifetime, Dr. Yannis Scarpas cared for the church but after his death his heirs did not continue his interest and the church gradually fell into a state of disrepair. Bats nested in the broken roof, rainwater soaked through to the interior and waves eroded the foundations on the south-western side. The narrow strip of land, some 60 meters in length, which joined the church to the mainland was frequently rendered all but impassable during the winter months as the sea waters rose. Time had embarked on its ruinous course. 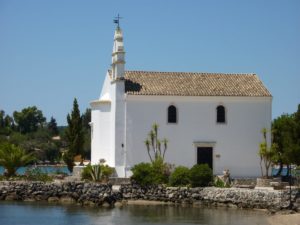 Spiros (Tzavros) Metallinos was the protagonist who, with the help of the local press, originally tried to raise interest in saving the church. He, together with a number of people equally concerned about the fate of the church, formed a fund-raising committee with the aim of the complete restoration of the church. The committee consisted of the parish priest of Ag. Panton Church, Josiph Georgoulas, Eleftherios Lingos, Konstantinos (Tzavros) Metallinos, Maria Mikalef, Stamatis Montsenigos, Georgios Spirou, Ilias Vasios, Yannis Lingos, Nikolas Bakolis and Spiros Doukas, In 1996 work began on the restoration of the church, thanks largely to the tireless efforts of Eleftherios Lingos. He was supported in his efforts by members if the committee and with the help of financial donations made by members of the Christian community. 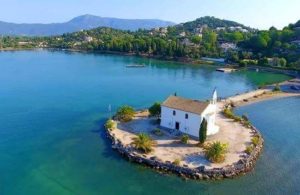 Mr. Lingos made every effort, with the assistance of engineers and the archaeological authorities, to restore the church to its original form.

Everything remained as it was. Stone by stone the chiselled Baroque style iconostasis was dismantled and restored to its original form with the exception of the few pieces that time had eroded and which were repaired. The altar stone as well as the iconostasis and the stairs are all made of traditional Corfiot stone. The rest of the contents of the church, except fot the Cross, are donations from the Christian community.

Today an environment of beauty and tranquility has been created where visitors can relax on the stone benches and enjoy the church and the unique scenery of the Bay of Gouvia.

The church celebrates two feast days; its own feast day on 2 February and on 17 July, the feast of Ag. Marina.