At the historical village of Gouvia, at the end of the Marina, lies the old Venetian shipyard (Neorio)

The Neorio in Gouvia is a remnant of a bygone era. Its skeleton stands today.

In the early years of the Serenissima Venetian Empire, its ships docked in Mandraki,at the Old Fortress of Corfu town.Soon, however, the need for a greater military port with spacious warehouses and dry docks arised. The bay of Gouvia, seven kilometers northwest of the town was selected for this purpose . The depth in the area is 4-5 fathoms and the narrow mouth of the inlet needed no defense works. 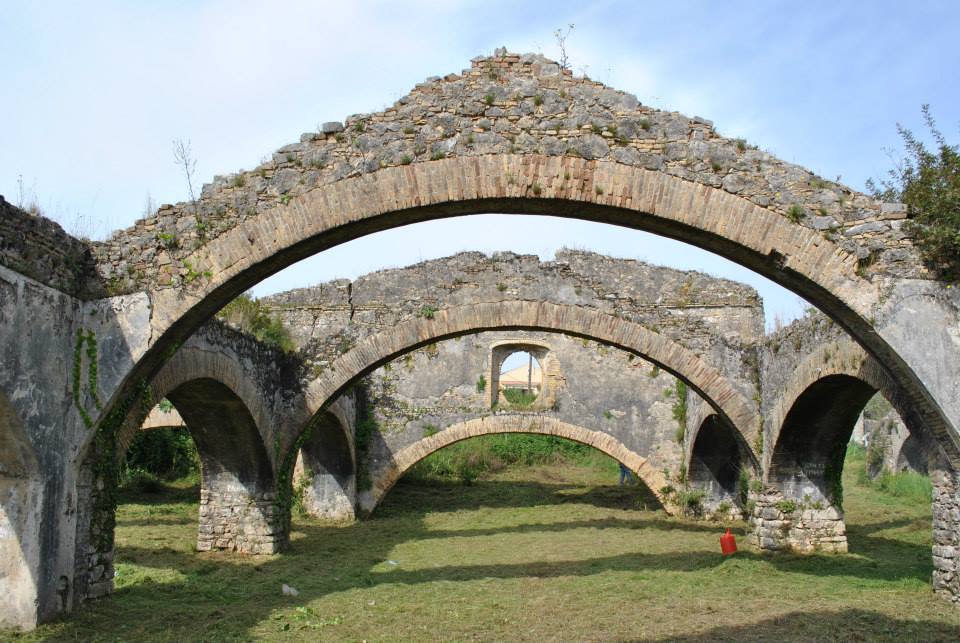 The Ottoman army, under the command of Hayreddin Barbarossa, disembarked at Gouvia for the first time on August 29, 1537

The Ottomans, having destroyed the central part of Corfu island, then moved on to the town and unsuccessfully besieged the Old Fortress.

In the late 16th century, the port could accommodate 25 galleys.

In 1716, when the Ottomans attacked Corfu for a second time, they again disembarked in the same place.

After repelling the attack, the Venetians decided to fortify the position and

after the siege of 1716 they began to construct the Neorion facilities.

At the shipyard they held the winter maintenance and repair of all ships anchored in Corfu. In the late 16th century, the port could accommodate 25 galleys.

In the last years of the Venetian occupation, the facilities were neglected and the entrance of the bay had become problematic due to deposition of large volumes of sand by currents and southeastern winds.

The Democratic French also used the Neorion facilities, while in 1798 the Russian and Turkish fleet anchored there.

The siege of the Russians to occupy Corfu began on November 4, 1798, but the attackers decided to wait on the Turkish aid before attempting a landing. On November 13th, a small Russian contingent made a landing and managed to secure a small enclave in the area of ​​Gouvia, where they installed cannons which fired against the fortresses of the island.

Aid finally arrived in February 1799 and numbered 4,000 Turkish and Albanian soldiers. On the morning of February 28th began the invasion of attacking the Vido island, which was occupied in two hours. The next day began the cannonade of Corfu fortress in Vido, the Russian enclave of Gouvia and the Russo-Turkish ships, while the attackers managed to occupy the three forts of the town. Admiral Ousakof intended to attack the two main fortresses of Corfu town, but the next morning the French side called a 48-hour truce to eventually be delivered on the morning of March 3rd.

In 1807 with the return of the French Empire, the French built three new emplacements in the bay mouth, which served as forts. One of them is the Scarpa fort. The bay of Gouvia was last used by a naval ship in 1814, when a British corvette anchored in its waters.

The subsequent history of the region is rich and interesting. It concerns the creation of the French seaplane base in 1916 as well as the disembarkation of the Serbs. It was also used in 1918 by the US Navy, as a basis for high-speed Sub Chasers which participated in the blockade of the Strait of Otranto.

During the midwar years French seaplanes carrying mail and passengers again used the area until the beginning of the Second World War.

During WWII the facilities hosted seaplanes used by both the Italians and the Germans.

Nowadays the area is used by modern seaplanes.